Everyone thought 5 years old had tumor 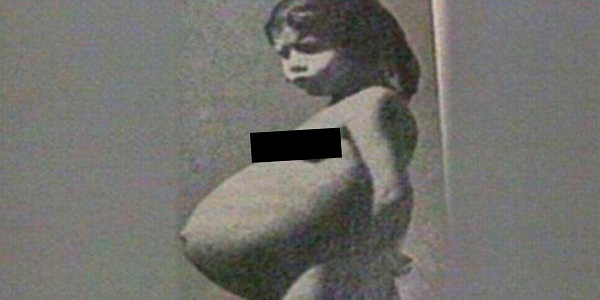 Teenage pregnancy can be difficult to talk about. But it's nothing compared to child pregnancy. In most cases, it involves the sexual exploitation of minors and a mother who is in no way repared to be a parent.

So it's hard to imagine what life was for Lina Medina, the youngest confirmed mother in medical history. She was only five years, seven months, and 21 days old when she gave birth to a son.

And yet, the man who raped the little girl never got punished.

Lina Medina was born in 1933 in the poor, remote city of Ticrapo, Peru. She lived in cramped living quarters with her parents and eight siblings.

When Lina was four, her dad noticed something strange: his daughter's stomach started blowing up like a balloon.

After a while, Lina's large stomach was the talk of the town, and several people believed she had a "demon" inside her. Her father even contacted healers and shamans to see what they could do to remove it.

Nothing worked, and Lina's family started to suspect that she had a tumor. Finally, they walked to the city of Pisco and brought the little girl to the city's hospital.

There they met Gerardo Lozado, a doctor who, like Lina's parents, first suspected that she had a tumor.

But soon, he discovered that he was wrong—and the shocking truth was revealed.

The doctor couldn't believe his eyes. He called in distinguished specialists from the capital, Lima. But they only confirmed what Lozado had discovered.

On May 14, 1939, when Lina was five years old, she gave birth to a healthy child via Caesarean section. He weighed 6 pounds (2.7 kg) and was 19 inches (48 cm) long. He was named Gerardo as a tribute to the doctor, according to the New York Post.

Lina's pregnancy became major news around the world and was reported on everywhere from the New York Times in the United States to the Daily Telegraph in England. It ran next to headlines about the fighting of World War II.

Lina received many offers to travel with her son to the United States to undergo medical tests. But Lina's parents refused and Peru's then president, Oscar Benavides, enacted a law to protect them from being used for financial gain and also promised them a grant that would take care of them for life. Unfortunately though, Lina never saw a penny.

Nobody could believe that such a young girl could become pregnant—and have a successful delivery.

In her hometown, Lina was regarded as a "virgin Mary." Some villagers speculated that her baby was the son of the sun god.

But the authorities didn't buy that explanation. They suspected that she had been raped by her father. The police took him in for interrogation and kept him in jail for a couple days. But they didn't have any evidence against him and released him. Afterward, suspicions turned toward one of her brothers, who suffered from mental problems.

Another line of investigation led police to the family gardener. He disappeared without a trace when Lina was confirmed to be pregnant.

But the identity of the monster, and father of the child, is still a mystery today, some 78 years later. Lina has never wanted to talk about it, despite persistent requests from the press.

Several years after the miraculous birth, Peruvian doctors discovered that she suffered from an extremely rare hormonal disorder of the pituitary gland.

According to the the American College of Obstetricians and Gynecologists, Lina got her first period when she was about eight months old, and when she was four years old, she was already in puberty. By the time she gave birth, Lina had the body of a fully developed adult woman. She set a world record which has only been matched by a similar case in Russia.

Obviously, Lina was unable to take care of her child, and Gerardo was taken care of by his grandparents. For a long time, the boy thought that Lina, who was playing the same toys, was his sister. Then when he was 10 years old, Gerardo learned the truth about who his mother was.

Life wasn't easy for the very young mother. But fortunately, she had a guardian angel: the doctor who delivered her baby. He later employed Lina as a secretary at his clinic. In the picture below, you can see an adult Lina with her son.

It took Lina quite a while before she became a mom again. When she was 30, Lina married a man named Ricardo Jurado, and had her second child when she was 38.

Lina's son Gerardo died at the age of 40 as a result of a bone marrow disease.

Lina and Ricardo moved to Mexico and lived there for several years before moving back to Peru and settling in a poor, dangerous area of Lima called "Little Chicago."

The couple built a home there, but the government tore it down in the 1980s to make way for a highway.

Then finally, it seemed like good luck had come Lina's way. In 2002, a gynecologist named José Sandoval took an interest in Lina's case. He call on the government to give her the grant they promised her when she was little. And Lina finally got the money.

Lina's husband explained to the media that the constant persecution by journalists over the years turned his wife into an introvert.

The now 83-year-old woman has never stopped being hounded by the press, which has been obsessed with revealing even the smallest detail of her story.

But Lina has always kept silent and declined every interview request she's ever received. And perhaps that's why the secret of this pregnancy still continues to amaze the world today.

I can't imagine how difficult it must have been for this girl to give birth and become a mother at that age. It mush have been so difficult—especially because, even after all these years, they've never caught the monster who did this to her! Please share this story if it moved you as much as it moved me.
ADS MizoogAds
MizoogAds
SHARE